Things NOT to See and Do in Anchorage, Alaska - Sourdough Mining Company 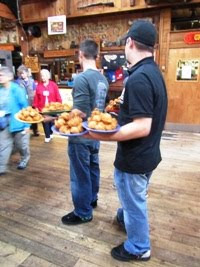 I was only in Alaska for a short week, and saw many wonderful things. Only one stood out as a definite “do not do.”

All You Can Eat Usually Spells Culinary Disaster
Our group package included a dinner (all you can eat) and show at The Sourdough Mining Company.

The restaurant’s free transportation, a converted school bus, transported us from our accommodations to the “gold mine” site, not all that far from the airport. There was a log building, rather quaint, on one side and the Alaska Wild Berry Store on the other. As we entered the restaurant, we weren’t quite sure what was in store for us. Soon we found out.

We were escorted to our rustic wood table and immediately (forget the drink orders) we were presented with round fried balls of something. Eventually we found that these were the famous corn fritters complete with honey butter. After the fritters came French fried potato slices and a few bowls of creamy cole slaw.

As the waiter came around taking drink orders, we noticed the lack of wine list or drink menu and prices. As the waiter had a strong need for efficiency, we ordered our chosen beverages and immediately returned to passing huge plates of steaming foods… ribs, salmon and chicken. All meats seemed to be baked or steamed vs. bar-b-qued. One of our group inquired about sourdough bread (namesake of the restaurant) and was told they didn’t serve sourdough bread.

We sipped, chomped and passed the plates, some of which never emptied. Our waiter announced that we could move on across the street to the Alaska Wild Berry Store where we could shop until the show started in “tent city.” We hadn’t yet finished our wine and beer, so we felt a bit pushed and opted for a brief “sit down strike” in order to finish our meal and drinks.

Complimentary Sundae-bar - Fitting End to a Quick Meal
Diners lined up for the “sundae-bar.” Since across the street was a wild berry store I had been secretly hoping the restaurant would serve a berry pie or cobbler. No such luck. I swigged down my wine and joined my group in line for the ice cream. I had heard there would be ice cream and a wide range of toppings. Actually there was a soft-serve ice cream machine (self serve) with a variety of toppings to choose from. The ice cream was heavy on the ice and weak on the cream. I did get my chocolate fix.

Sticker Shock (and I don't Mean Berry Stickers)
The waiter promptly brought us our drink bills. OMG! Each drink was double what we usually paid for a beer or house wine PLUS they added $1.50 service charge AND 18% gratuity. The waiter, pleasant enough, was tops at efficiency and motioned us to pay at the cashier’s stand. Again, we lined up like sheep and vowed to price our purchases in the future before ordering.

As directed, we crossed the street to the Alaska Wild Berry Company. After all, we had an hour and a half to wait for the show and it was chilly outside. Inside the immense store we enjoyed the centerpiece, a 20 ft. high chocolate fountain (no dipping or swimming allowed) and took the obligatory photos. 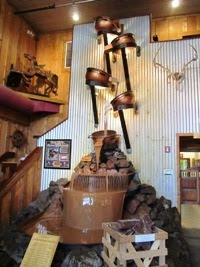 We perused the store and found it to be a tourist trap with stuffed animals, junk jewelry and t-shirts galore. In one corner there was a chocolate shop handing out samples. I tried the chocolate with raspberry filling. It was forgettable.

Escape!
We spent as much time as we could stand in the store and realized we had more than an hour left before the show. We saw some of our group outside waiting for a cab (smart women that they were) and we recalled the bus driver saying they could shuttle us back at any time. After discussing that, the taxi-riders opted to wait for the free shuttle and cancelled their cab.

We requested a shuttle and the van was suggested. The crowd in front of the restaurant grew as word was passed along that we could leave early and avoid the sure to be uber-folksy show in the sure to be cold and damp tent. We were told that the school bus was being readied to take us back. We waited longer and the crowd grew. After some time, the free bus arrived and our group filled most of the 40 seats. The door was closed as people not in our group tried to board.

As we were driven back to our accommodations, we had a feeling of relief. We had escaped the hustle-bustle atmosphere of this tourist trap. We had avoided a show which, given the quality of the food and service at the restaurant, was sure to end our day on a down-note detracting from our otherwise marvelous stay in Alaska.