London Bridge at Lake Havasu, Arizona is alive and well (Not falling down) 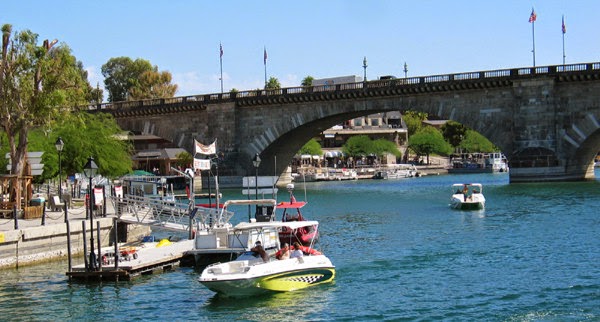 Imagine being the Mayor of Lake Havasu City, Arizona, and coming to work one day to learn that your city's iconic bridge, shipped to this desert oasis and painstakingly reconstructed stone-by-stone in the late 1960s to become Arizona's number two tourist attraction - imagine reading in a London newspaper that it was, in fact, falling down. Just like the nursery rhyme.

Such was the case this week when a concerned citizen returning from a visit to London gave Mayor Mark Nexsen a story in the U.K.'s The Sun that said the famed bridge is scheduled to be "bulldozed."

While the English Village built beneath London Bridge has seen higher visitation in the 1970s and 1980s and is currently being revitalized, the bridge itself is as solid as ever, save for a few ghosts said to have been transported within the stonework in 1969.

To counter the story, the city's Visitors Bureau is demanding that The Sun print a front-page apology and retraction for having published a complete fabrication.

"An article like this is a stain upon our honor," says Doug Traub, president and CEO of the Lake Havasu City Convention & Visitors Bureau. "For over four decades we have been dedicated custodians of British history. We stand to lose millions of dollars in tourism revenue if our friends in the United Kingdom stay away out of spite.

"The Sun claimed bridge maintenance stopped," Traub continues. "We invite them to return to write another article - on top of their retraction - as we invest $624,000 more this year in bridge maintenance, in addition to the $2.5 million in bridge maintenance we've invested over the past 10 years. We are a small town and our hard-earned taxes pay for all of this upkeep. We can't afford a hit like this. It's just awful to us, a slap in the face."

The Bureau is not stopping with just a strong demand for a retraction. It will begin reaching out to volunteers for help in spreading the word that the London Bridge is well maintained.

Starting Sunday, June 29, anyone with a U.K. passport, or anyone else with confirmed airfare to the U.K. in July or August, will be provided with a thumbnail-sized piece of the bridge and a brochure about the historic structure. The idea is to have returning residents of Great Britain, and Americans traveling to London on work or vacation, testify that all's well with what's been called the "world's largest antique."

Says the City's Mark Clark, PE, PTOE, Maintenance Services Division Manager, "All these improvements that we continue to make keep the bridge intact to avoid any major failures. Once our work is completed this summer, we should have a bridge that lasts another 40 years or more."

The bridge has been holding up well these 43 years, but water has leaked into one of the support piers and now needs to be pumped and dried out. Lake Havasu City also plans to create a maintenance entryway into the mainland side of the bridge to better ensure the safety of workers. Also on the repair schedule: there's sand on the bearing pads that prevent the bridge from smoothly expanding and contracting in various temperatures. Those pads will now be cleaned.

The CVB's Traub continues, "The Sun story also says the bridge will be torn down to attract drug tourism. Last time we looked, this was illegal in Arizona."

The city's Visitors Center, located in the shadow of the bridge, regularly sells bridge fragments to tourists. The stones are literally a chip off an old block that was transported to Lake Havasu by founder Robert P. McCulloch, but never used in the reconstruction.

U.K. residents and Americans heading to Great Britain can claim their souvenir fragments by visiting the Visitors Center at 422 English Village.

According to the Lake Havasu Tourism website, in 1967, the Common Council of the City of London began to look for potential buyers for the London Bridge. Lake Havasu City founder and entrepreneur Robert P. McCulloch placed the winning bid of $2,460,000 on April 18, 1968. McCulloch came by this figure by doubling the estimated cost of dismantling the structure, which was $1.2 million, bringing the price to $2.4 million. He then added on $60,000 – a thousand dollars for each year of his age at the time he estimated the bridge would be reconstructed in Arizona. Each block was meticulously numbered before the bridge was disassembled. The blocks were then shipped overseas through the Panama Canal to California and trucked from Long Beach to Arizona. Following reconstruction of the London Bridge, Lake Havasu City rededicated it in a ceremony on October 10, 1971.

The London Bridge, Arizona tourism’s second-largest attraction after the Grand Canyon, attracts thousands of visitors each year and is a popular stroll for people on romantic getaways in Arizona.

The Lake Havasu City Visitors Center conducts a 45-minute walking tour of the London Bridge. Arizona tourists can see the strafing scars from WWII that mar the bridge’s granite surface and stroll over sparkling Bridgewater Channel. The bridge is also a popular hangout for the Arizona boating crowd and you’ll see all kinds of boats anchored in the shadow of this piece of history.

Learn more about the history of the bridge here: