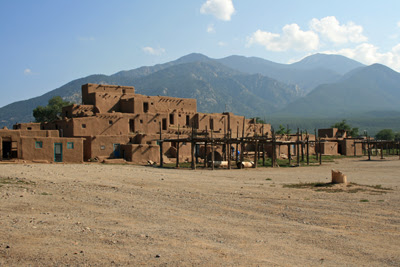 Taos Pueblo is a must-see on your visit to northern New Mexico. Located just outside the main tourism area of modern Taos, it is the largest surviving multi-storied Pueblo structure in the United States. It is an amazing place and an important stop when you tour the area.

Taos Pueblo has been designated a National Historic Landmark.  Taos Pueblo is also on the United Nations World Heritage List.

History of Taos
Taos Pueblo is the northernmost of the nineteen Indian Pueblos. It is still owned by Pueblo families, some of whom live in the multi-story building, bake their bread in the hornos and farm in the valley. The Pueblo you will see on your visit was reportedly built around 1350, although the Taos people claim that they have always been settled in the valley.

A runner coordinated efforts between the Pueblos who then revolted against the Spanish as a united effort. Spanish settlers fled to Santa Fe and Isleta Pueblo, one of the few Pueblos that did not participate in the revolt. The Puebloans then attacked the Governor’s Palace in Santa Fe driving the Spanish out of the city. 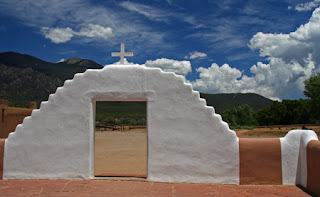 By the end of the century, however, the Spanish had re-conquered the Pueblos. Today, you will see certain pueblos take the step to return to their original names, giving up the Spanish names that were originally forced on them. The revolt continues in this small way.

Visiting Taos Pueblo
The Pueblo is generally open to visitors Monday through Saturday from 8 a.m. to 4:30 p.m and Sunday 8:30 a.m. to 4:30 p.m, except when tribal rituals require closing the Pueblo. Late winter to early Spring the Pueblo closes for about ten weeks. The pueblo recommends that you call ahead if you’ll be visiting during this time. 505.758.1028.


This blog highlights destinations, experiences and products I feel readers will enjoy. In all cases, I have written my honest opinion about my experiences. Your experience may differ. In some cases I have been hosted for these experiences.

Some posts contains affiliate links which means that if you click on one of the product links to book a hotel or make a purchase, I’ll receive a small referral fee. Your support will help keep this website running….thank you!