Just north of Phoenix, Arizona, traveling north on I-17,  you'll find the Verde Valley. While many go there to enjoy the Verde Valley Wine Trail or take the Verde Canyon Railway excursion train, there are mysteries to be discovered in the remnants of the ancient cultures of the area.

The people that settled this valley came for the water and the abundant rich soil along the river. Visitors today can enjoy the massive "Montezuma Castle" cliff dwellings, drive a little farther north and hike in to see Montezuma Well and take a side trip to Tuzigoot National Monument with some great ruins to explore and a visitors center for information.

This is the way to get a sense of how these early people lived and, perhaps, why they moved on. 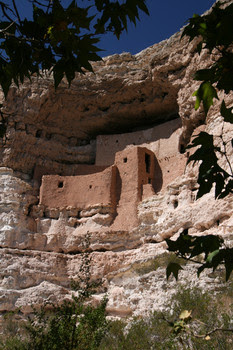 Visiting Montezuma Castle
Montezuma Castle isn't a castle at all. It's an impressive collection of ancient Sinaguan cliff dwellings. It is easy to see why ancient people stayed awhile to farm this land. What isn't clear is why they left. It is interesting that the people have been named the Sinagua (without water, in Spanish). You'll first stop at the Visitors Center where you'll learn about the ancient Sinaguan people.

The construction of Montezuma Castle began around 900 years ago and was abandoned about 600 years ago. The paved trail will take you to great places to view and photograph the cliff dwellings high up on the face of the cliff.

There are plenty of sycamore trees to shade you as you walk the short path to view the impressive dwellings.

As you continue on the path, you'll be able to visualize where the Sinaguans farmed and where they were able to draw water. And yes, there was water when they lived there. The name was given to them by archaeologists who noted, at the time of their work, that there was not much water in the valley. 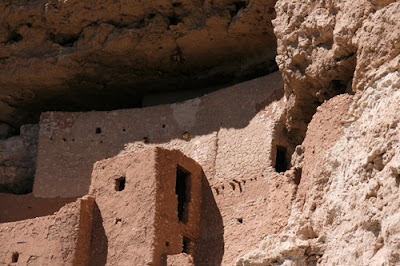 You can no longer climb into the cliff dwellings as they are much too fragile and have had to be partially reconstructed. But the view from the pathways is striking.

Montezuma Well
Just north of Montezuma Castle is Montezuma Well, a fascinating sinkhole with some smaller cliff dwellings visible in the rock wall that surrounds the well. Formed long ago by the collapse of a limestone cavern, over one million gallons of water a day flows continuously into the Well. This constant supply of warm (74 degrees), fresh water provides an aquatic habitat like no other in the world, and has served as an oasis for wildlife and humans for thousands of years. If you look into the caves at the bottom of the path, you'll likely find some bats. 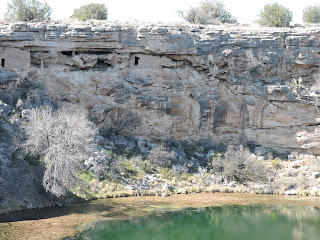 Not far from the well, follow the water to a lovely, grassy park. It is a quiet place to read a book in the shade.

Montezuma Well's outflow has been used for irrigation since the 8th century. Part of a prehistoric canal is preserved at the picnic ground.

Tuzigoot
Tuzigoot, not far from Montezuma Castle is an ancient village or pueblo also built by the Sinagua. The pueblo consisted of 110 rooms including second and third story structures. The first buildings were built around A.D. 1000. It is not a cliff dwelling. 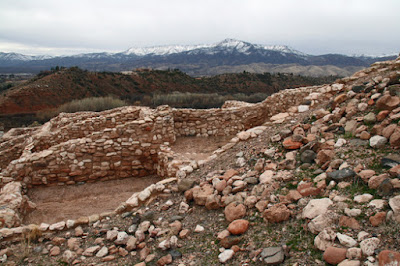 The Sinagua were farmers with trade connections that spanned hundreds of miles. As you walk the trails and along walls, you can see the area where the ancient people farmed and it is easy to imagine corn, beans and squash being grown and stored in rooms of the pueblo.

This site is closest to Cottonwood.

When You Go
Tuzigoot, Montezuma Castle and Montezuma Well can all be visited in a day.

Take a picnic and plenty of water. The best place to picnic is at the grassy area near the trailhead and parking for Montezuma Well. There are picnic tables and shade.

Avoid visiting in summer as it is just too hot.

Map of AZ Ancient Sites
Posted by Elizabeth R Rose at 8:18 AM